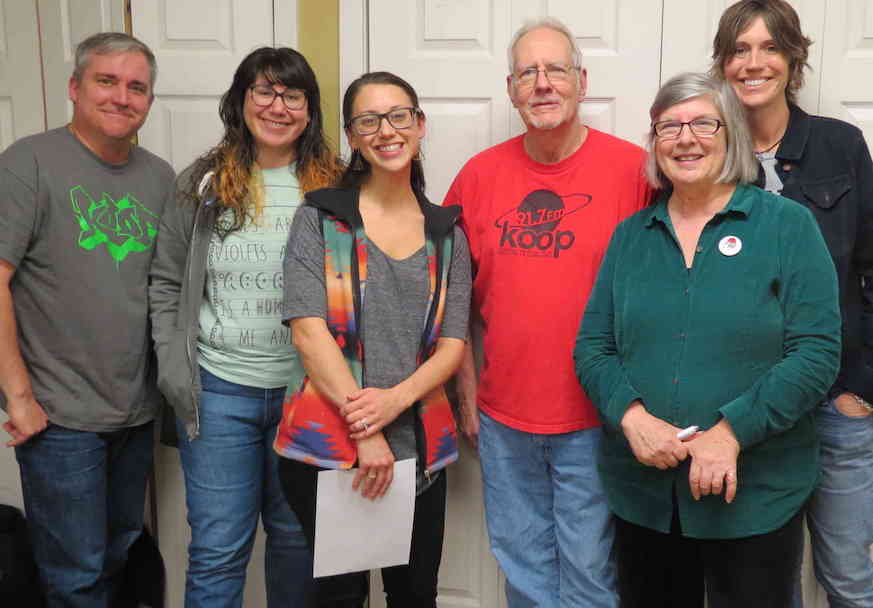 In honor of International Women's Day, Thorne Dreyer and guest host Alice Embree are joined by Texas advocates for reproductive justice. Rag Radio guests are Kim Varela-Broxson, co-chair of the Democratic Socialists of America (DSA) Feminist Action Committee and Lindsay Rodriguez, an organizer of the National Network of Abortion Funds Bowl-a-Thon. Kim Varela-Broxson spent most of her life in California, before attending the University of Arizona for undergrad and the University of Texas at Austin for graduate school. She's been involved with DSA and abortion access for about a year. She's the co-chair of the Austin DSA Feminist Action Committee and the co-chair of the national DSA Abortion Access Committee. Lindsay Rodriguez is the Communications and Digital Organizing Manager for the National Network of Abortion Funds. In that capacity, she also manages and coordinates the National Abortion Access Bowl-a-Thon, the largest annual grassroots, participant-driven fundraising event for abortion access, with over 50 events in more than 30 states in the U.S. Born and mostly raised in San Antonio, Lindsay was Lilith Fund's first San Antonio board member before becoming President in 2014, and then rolling off the board to join NNAF. She now lives in Austin. Guest host Alice Embree is a longtime Austin peace and justice activist and union member. She worked with the original Rag in the '60s, writes for The Rag Blog, has been guest and co-host on Rag Radio, and is one of the editors of the acclaimed book, Celebrating The Rag: Austin's Iconic Underground Newspaper. A veteran of the Women's Liberation Movement, Alice was a contributor to the 1970 anthology, Sisterhood is Powerful. She is also a member of DSA. Above: Rag Radio's Tracey Schulz, guests Lindsay Rodriguez and Kim Varela-Brown, and Rag Radio's Thorne Dreyer, Alice Embree, and Suzy Shelor. Photo by Roger Baker/Rag Radio. This show was first broadcast during KOOP Radio's Spring Membership Drive and pitching for donations has been removed from the podcast.
Rag Radio is produced in the studios of KOOP 91.7-FM, an all-volunteer, cooperatively-run, solar powered community radio station in Austin, Texas, in association with The Rag Blog and the New Journalism Project, a Texas 501(c)(3) nonprofit. It is streamed live on the Internet at KOOP.org and Radio Free America. The host and producer of Rag Radio, Thorne Dreyer, is a prominent Austin-based activist and writer who was a pioneer of the ’60s underground press movement. The show’s engineer and co-producer is Tracey Schulz and the staff photographer is Roger Baker. The syndicated show is broadcast (and streamed) live Fridays, 2-3 p.m. (Central) on KOOP, and is later rebroadcast and streamed on WFTE-FM in Mt. Cobb and Scranton, PA., on Houston Pacifica's KPFT HD-3 90.1, and by KKRN, 88.5-FM in Round Mountain, CA -- and as a featured podcast at Veterans Today. Learn more about Rag Radio here. Running time: 45:24 Contact: ragradio@koop.org.